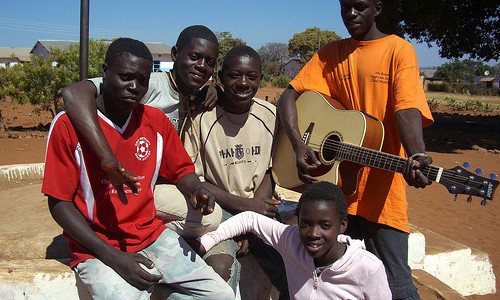 Music is a great way to raise funds and promote awareness for hardships such as HIV/AIDS and malaria prevention as well as poverty. Children in remote villages have very few activities to keep them occupied so when a volunteer called Brendan Poynton, accompanied by his friend Valerie Buchanan, arrived at Mukuni to give music lessons to the pupils, they had a captive audience. Through The Butterfly Tree Brendan worked with orphans and vulnerable children in the schools of Mukuni, N’gandu and Kamwi teaching them how to play a guitar, which he donated to Mukuni Basic School before his departure.

Brendan was so moved by the plight of the orphans that he raised funds to build a Music Centre at Mukuni Village. The Music Centre, in addition to being used as a teaching establishment, will to hold concerts and drama productions to assist the HIV/AIDS prevention and the fight against this devastating virus.