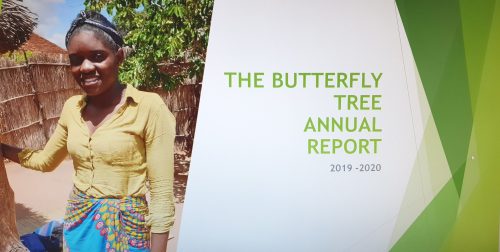 I am pleased to present to you our Annual Report and Accounts, covering the period from the 1st April 2019 to the 31st March 2020. The full report with pictures of our many benefiaries, and accounts can be viewed by clicking on this link.

Throughout the year only 2.64% of total expenditure was spent on expenses, therefore 97.36% went to charitable causes.

In our 2018-19 Annual Report I stated that the year was one of the best we have ever had. Little did I know that 2019-20, though the most challenging of all years, surpassed anything we have ever done before. The funding we received doubled any previous year thanks to increased donations from both existing and new supporters, and a substantial grant award. More new schools and clinics have been developed, additional boreholes in remote areas have been installed, many more orphans have been supported both at school and college, and for the first time the charity responded to a widespread food crisis to alleviate severe hunger. 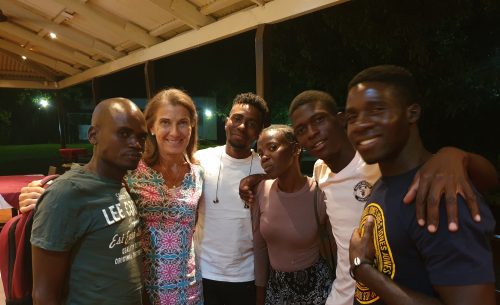 The worse drought in Zambia for thirty years resulted in dry rivers and streams, and withered crops, leading to famine in some areas. For many years I have worked with communities effected by malaria, HIV and AIDS, but meeting distraught parents who were unable to feed their children was absolutely heart breaking. Thanks to the tremendous response from our donors, grant aid, and fundraising efforts, we supplied ground maize, the staple diet of Zambians, to people in Nyawa, Mukuni, Musokowane and Sekute Chiefdoms. Over 10,000 households were helped and the supply chain continued for an entire year. I am told by our team in Zambia that we saved many lives. 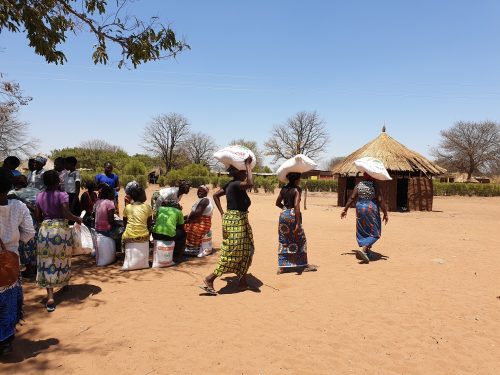 I have been totally overwhelmed by the tremendous support we received and the efforts made by fundraisers. These include a Great South Run participant who raised money for a borehole, a mother who donated a borehole for her daughter’s first birthday, Inner Wheel and Rotary Clubs raising money for malaria prevention, and a young man who while walking from Porto in Portugal to Santiago in Spain raised funds and awareness of malaria. Churches and schools held fundraisers for education projects, and for bags of maize for the food crisis. 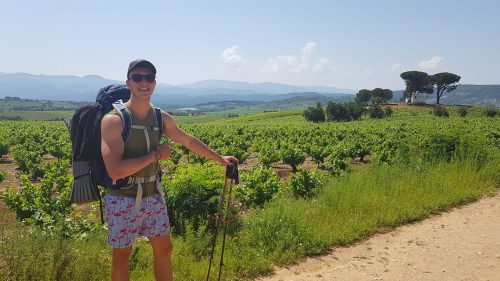 The picture of the young lady on the front cover of the Annual Report is one of the three girls who inspired the founding of The Butterfly Tree. I met Esnart in 2006 when I first visited Mukuni Village. She and her two friends showed me inside their home and it was evident that they lived in extreme poverty. Having sponsored Esnart for the past fourteen years, she completed Mukuni High School, where she was head girl, in December 2019. She gained good results and now aims to train with the Zambian police force. 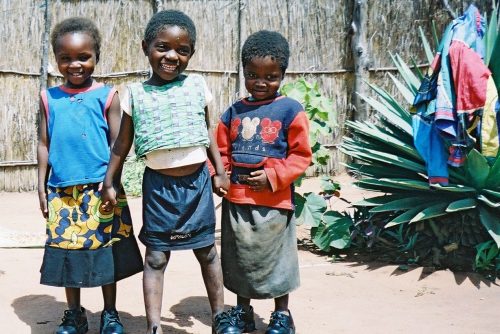 ANGELA, ESNART AND CYNTHIA WHO INSPIRED THE FOUNDING OF THE CHARITY – MARCH 2006

Education is the key in helping orphans and vulnerable children to overcome poverty in rural areas, where children, especially girls, need to be empowered. This helps them to avoid early marriages and pregnancies. We received a substantial amount of support to enable us to develop and expand schools for children who would not have been able to access education due to distance. River View Secondary School is now our flagship school, after constructing a 1×4 classroom block, science lab, and, most recently, a 1×2 classroom block and two boarding shelters. Due to the location of the school, near to the town of Kazungula, places are in high demand and by the end of 2019 it had an intake of almost 1,600 pupils. A new satellite school has been built to take pupils who were unable to attend and to reduce the class numbers at River View. Kawewa Junior School, also in Sekute Chiefdom, received a 1 x 2 classroom block, desks and toilets. 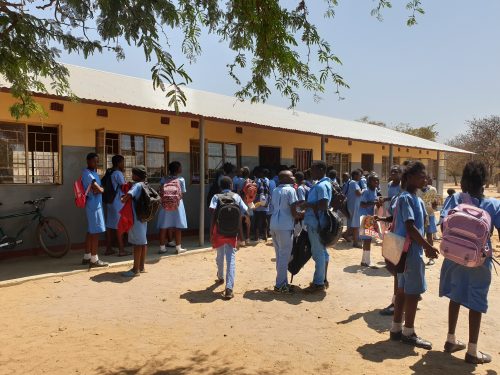 We continue to sponsor as many orphans as funds permit, in five schools. In addition, seven students are currently attending universities and colleges. Topics include bio-medicine, teaching, journalism and information technology. One student graduated as a teacher this year. Two of our former sponsored orphans are now on The Butterfly Tree team and five others are earning an income building our schools, clinics and houses. 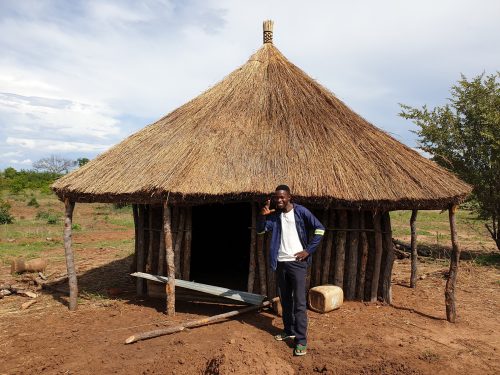 As always we endeavour to drill boreholes for schools and communities, though water projects almost always come with challenges. Unfortunately, most of the drilling companies will not attempt to go to remote areas where the tracks are uneven and sandy. There is also the risk of hitting dry boreholes. Sadly, after three attempts, no water could be found in Dundumwezi area. However, five were drilled successfully before the rains came with eight more to follow after the rainy season. 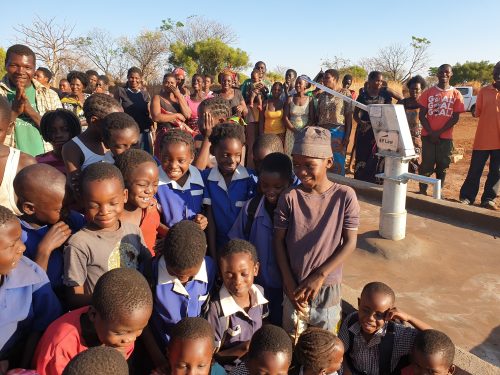 Boreholes are not only vital for safe drinking, but in times of drought they are life-saving. During the 2019 drought where streams and, in some areas, rivers, were completely dry, people were travelling up to twenty six kilometres to fetch water. The substantial grant award we received will provide five boreholes for schools, one for a community, and five water systems for school food production units. The new government directive is that all schools must now provide sustainable school gardens to support feeding programmes. 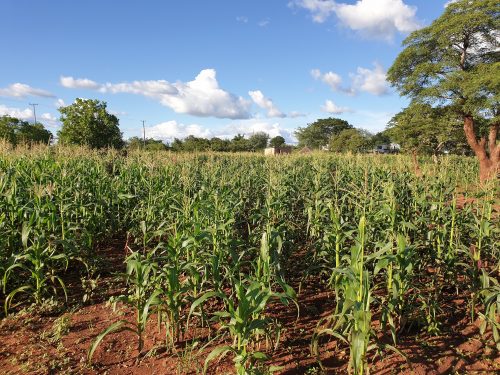 When I visit Zambia it is always so rewarding to see the developments taking shape. A new maternity ward and women’s shelter was added to Simonga Rural Health Centre and I had the pleasure of taking 150 delegates from Blooms the Chemist, Australia, to visit the new buildings which they had funded. It always has more impact when donors can actually see what they have funded, as was the case with the three Belgian lawyers who spent several days with us after raising money for boreholes and food security. 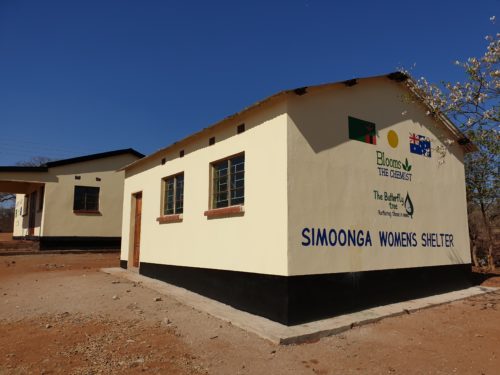 Malaria is still one of the biggest challenges but our mosquito nets for schools is proving to substantially reduce the number of new cases of malaria. Children over the age of five often get left out as priority is given to under-fives. Working with the Ministry of Health helps us to locate areas of high malaria prevalence. We also applied insecticide coating and larvicide in Moomba, Nyawa and Mukuni Chiefdom. 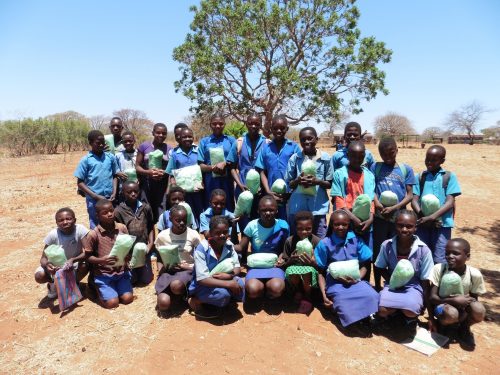 As always we continue to source new areas of need, taking an holistic approach and assessing the most essential basic needs – WATER, FOOD, HEALTH AND EDUCATION. Though education is the way forward and can change a person’s life, when people, through no fault of their own, are suffering from severe water and food shortages, it is not a priority. Fundamental needs for survival are paramount. 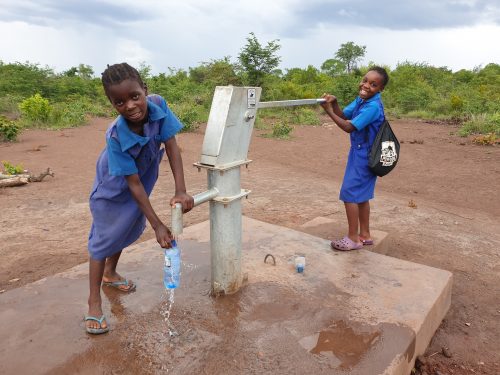 I cannot praise enough our incredible team of Trustees and volunteers both in the UK and Zambia. In the UK, Ann Sutton (Treasurer), Miranda de Freston and Jackie Brown have been instrumental in supporting me, and offering their expertise to the Board. David, Carolyn, Valerie and Leah
are our main volunteers who freely give up their time to help with administration, fundraising and safeguarding. All are invaluable. Our oversees volunteers must not be forgotten – Frank Maiolo (US), Marilee Gibson and Katie Kung (Canada). 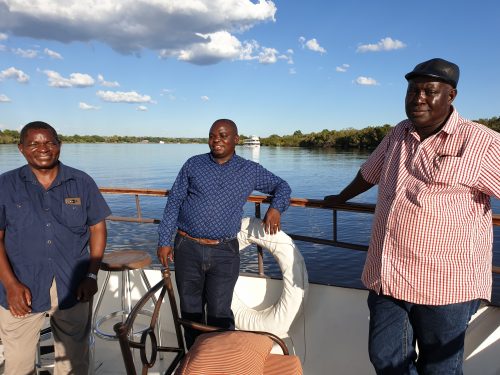 As for our Zambian team, the four Trustees have been with us since 2006 – Mupotola Siloka (Secretary), Presley Mulenga (education), Martin Mushabati (ground operations), Stain Musungaila (malaria and community projects). Volunteers – Sibeso Maseka (Environmental Technician), Natasha Mufuya and Mafian Sitali (orphan sponsorship and community housing), Lloyd Kasela (community projects). I am humbled by the work they have done to implement, monitor and manage the projects on the ground. This past year they were given what seemed to be an impossible task, but they went beyond the call of duty to dleiver emergency food relief, covering a vast area, to prevent a famine. 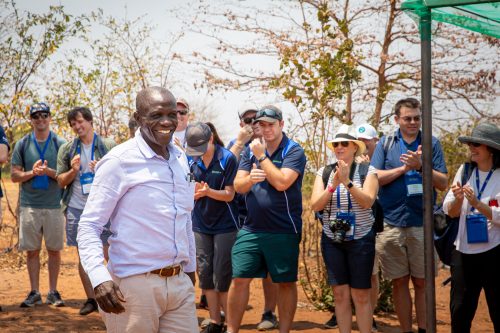 A special thank you to each and every donor that has supported us during this past year. We are especially grateful for the continued support of so many loyal contributors and delighted to welcome new ones who have funded a variety of projects, as well as sponsoring orphans. It is impossible to name everyone, but every donation is equally important to us. Fundraising enables us to sustain the ongoing projects in Zambia, and to initiate new ones with the aim of improvingthe lives of some of the most vulnerable children on the planet.

Once again we are extremely grateful to Grenfell James, Stratford-upon-Avon for freely verifying the charity accounts, which can be viewed on the full Annual Report and Accounts.

If you wish for further details about The Butterfly Tree or would like to sign up for our secure newsletter please contact me via email: jane@thebutterflytree.org.uk