According to the World Health Organization half of the world’s population are at risk of malaria. While there are four parasites that can cause malaria in humans, Plasmodium falciparum is by far the most deadly and common – this strain is prevalent in Zambia.

Malaria kills one child every two minutes. According to the UN children’s agency, UNICEF malaria claims the lives of more than 2,500 each day.
The WHO’s latest update – December 2021:

2021 – Distribution of 2,000 mosquito nets to rural schools where malaria is most prevalent

2021 – Working in partnership with Medical Aid Films, using an animated film on ‘How to prevent malaria’ in the Kazungula District health facilities

2020 – Translation of an animated film,  produced by Medical Aid Films, on ‘How to prevent malaria’ and distributed to Kazungula District Health facilities

2019 – Zero cases of malaria in Nyawa Villages after intervention

2018 – Larviciding through Moomba Chiefdom at Kamwi area of Mukuni Chiefdom

2018 – New programme in Nyawa Chiefdom with distibution of 650 mosquito nets, insecticidal coating in 170 dwellings and larviciding in ponds and streams

2017 – Pioneer programme – distribution of mosquito nets in schools. 1,450 given to every pupils and teacher at River View School

2017 – June, July and August no new cases of malaria reported in Mukuni Chiefdom

2017 – Only one case of malaria reported in areas where the new products have been applied, which was contracted from outside the area

In 2016 Zambia saw an increase in malaria, with outbreaks turning into emergencies in the districts of Ndola, Kazungula and Kabwe. Kazungula recorded over 9,000 cases, however the entire Mukuni Chiefdom had only 200, but only a handful in the areas where our new malaria prevention intervention was applied. Whereas Singwamba, in the Nyawa Chiefdom, recorded 3,245 cases and 12 deaths in children between the ages of 1 and 13 years.

The villages in the Chuunga Community used to have high cases of malaria, due to lack of prevention methods. In November 2015 The Butterfly Tree distributed an innovative malaria prevention initiative, using a safe insecticidal coating, in all the households. From the 1st January to 31st March no new cases have malaria have been reported. Over 1,000 households have been protected in the Mukuni and Sekute Chiefdoms.

The charity has been granted a licence to for importation, storage transportation and distribution of new innovative products that could potentially save the lives of thousands of people. The first distribution of the products started in November 2015.

According to the World Health Organisation in 2019, there were an estimated 229 million cases of malaria in 91 countries, an increase of 12 million cases over 2016. 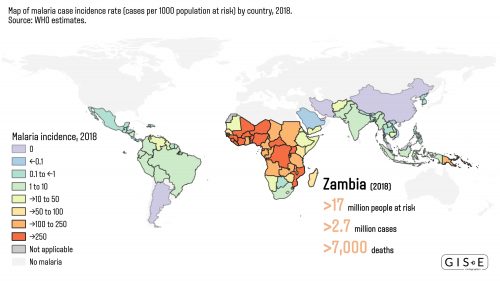 Map courtesy of GIS+E of malaria case incidence rate (cases per 1000 population at risk) by country, 2018. Source: WHO estimates.

Child deaths caused by malaria have halved in the last decade. Just £4 (US$5) will buy a mosquito net to help protect people from this destructive disease.

The Butterfly Tree helps to increase awareness and raise funds to assist Zambia’s fight against malaria. In 2015 a safe innovative malaria prevention initiative was brought into Zambia by The Butterfly Tree, with the potential to save thousands of lives. Inititally supported by Saga Charitable Trust and Medisave UK, followed by The Murphy Family Foundation, St James Place Foundation, and Rotary and Inner Wheel Clubs. It is proving to substantially reduce the number of malaria cases in the Southern Province of Zambia. The interventions include a safe insecticidal coating, which is harmless to humans and animals, and larviciding.

The charity also provides mosquito nets and educational workshops in remote villages and pioneered a project, ‘mosquito nets for schools’ in 2017.  Early testing is imperative – though malaria cannot be cured it can be easily treated. Workshops inform the people of the importance of being tested and how sleeping under insecticide-treated nets can save lives. Community health workers provide a vital role in helping to prevent complications caused by malaria.

To further help the global fight against malaria The Butterfly Tree has been working with Medical Aid Films. They have produced a wonderful, animated video on malaria prevention, after which The Butterfly Tree had it translated into the local Tokalya language: Use this link to see the film entitled ‘How to prevent malaria‘

The film has since been circulated to all health facilities in the Kazungula District and is one of their major methods use to sensitize the people and for facilities that do not have any equipment mobiles phone communication is being used.