The Victoria Falls, one of the seven natural wonders of the world, is a World Heritage Site and a must for anyone visiting Zambia. This major tourist attraction has a history that connects the Victoria Falls with Mukuni Village. 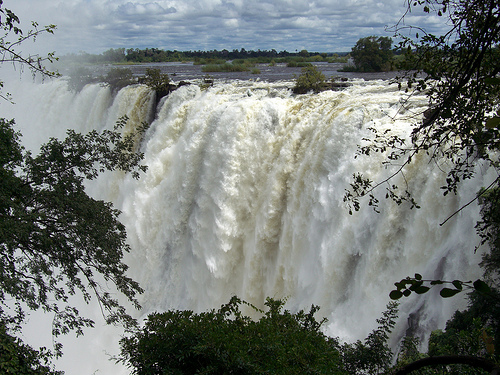 Victoria Falls – September 2009 before the rainy season. It is possible to walk the width of the river bed during the dry season

To the western world the Victoria Falls were discovered by David Livingstone in 1855, who named them after Queen Victoria, but long before this date his Makolola escorts and the Leya people called them Mosi-Oa-Tunya interpreted as The Smoke that Thunders.

Mukuni Royal Village lies just seven kilometres from Victoria Falls and was founded in the thirteenth century by Bedyango the Leya Tribal Matriach, it was originally called Gundu. However it was renamed in the seventeenth century after and in honour of Mukokalya Mukuni N’gombe. Victoria Falls – March 2010, a record year for water passing over the Falls from the great Zambezi River

Bene Mukuni Kingdom is the permanent traditional headquarters of the Leya people. It is one of the largest of its kind in Africa and is unique in having two palaces, Lumpasa for the male ruler and Nanjina for the female co-ruler.

I am very fortunate to be working not only with the Leya people but also to be working in one of the most stunning areas in Africa. On each of my visits to Zambia I take ‘time out’ to visit the Victoria Falls, each season changes the appearance of the Falls and each experience is entirely new.